Despite the proliferation of new 2D techniques over the past four decades, one of the most commonly used experiments is the very first one to have come into existence, COSY1. It’s easy to see why it’s withstood the test of time: firstly, it’s an extremely useful experiment, providing a direct and easy way of establishing “through bond” proton-proton connectivities (“this hydrogen is near or next to that hydrogen”); secondly, because it’s a homonuclear 2D experiment (that is to say, it correlates protons with protons) its’s a very sensitive one. The high sensitivity also means that it’s a quick experiment to run, particularly if the experiment uses gradients for coherence selection (more on that below and in a future blog post).

Example COSY spectra recorded on Spinsolve can be found elsewhere on the Magritek website, but a typical example is also shown in Figure 1 below, recorded on a sample of ethyl crotonate. The sequence used to collect this spectrum utilizes gradients, meaning that it was run using only a single scan per t1 increment, and with 512 increments it only took 15 minutes to run. 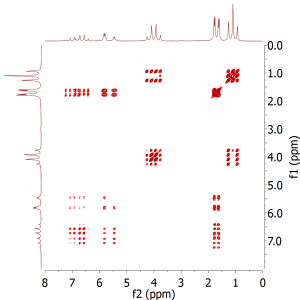 END_OF_DOCUMENT_TOKEN_TO_BE_REPLACED

In my last post I showed how the 2D TOCSY experiment can be used to identify individual “spin systems” or subunits within a molecule, or even within different molecules. Well, there is a very closely related, one-dimensional version of the TOCSY experiment that uses something called “selective excitation” in place of a full 2D experiment. This has the advantage that it is both quicker to run and easier to understand. The basic idea behind this so-called 1D TOCSY experiment is quite straightforward: first, a combination of shaped rf pulses and magnetic field gradients is used to selectively excite one signal in the spectrum; then, a special pulse sequence element called a “spinlock” is used to transfer magnetization from the “excited” spins to the other spins in the spin system, in exactly the same way as is done in 2D TOCSY. The result is a 1D spectrum in which only signals that appear from those that are in the same spin system as the excited signal.  This 1D TOCSY experiment can be very useful in a number of situations, particularly when there is considerable overlap in the spectrum. It’s a quick experiment, too, typically taking only a minute or two to run.

Let’s return to our mixture of 2-pentenal and 5-epoxyhexene. As discussed before, the proton spectrum shows a lot of overlap between the signals from the two sample components. 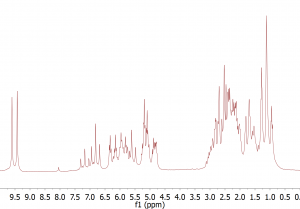 Fig. 1. Proton spectrum of a mixture of 2-pentenal and 5-epoxyhexene. The spectrum shows considerable overlap between the signals from the two components.

END_OF_DOCUMENT_TOKEN_TO_BE_REPLACED

The 2D TOCSY (TOtal Correlation SpectroscopY) experiment is a useful complement to the more familiar COSY experiment. Whereas COSY typically establishes correlations between protons over two to three chemical bonds, TOCSY can provide correlations between all the protons that make up a “spin system”. This ability of TOCSY helps identify discrete building blocks within a molecule, or distinguish spin systems from different molecules.

Consider the following example of a mixture of 2-pentenal (A) and 5-epoxyhexene (B). The proton and COSY spectra of this mixture show considerable peak overlap in some regions, making peak assignments difficult. 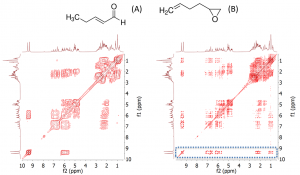 Fig. 1. Comparison of COSY (left) and TOCSY (right) spectra of a mixture of 2-pentenal and 5-epoxyhexene, collected on a Spinsolve system.

END_OF_DOCUMENT_TOKEN_TO_BE_REPLACED

One of the most widely-used 2D techniques these days is the HSQC (Heteronuclear Single Quantum Correlation) experiment. In the world of “small molecule” NMR, HSQC is most frequently used to correlate protons and carbons over one chemical bond.

END_OF_DOCUMENT_TOKEN_TO_BE_REPLACED

Paul works as Product Support Manager for Magritek. He is currently based in San Francisco, California. He obtained his Ph.D. in NMR technique development from The University of Manchester, U.K., under the supervision of Prof. Gareth Morris.