Quantification using any analytical method requires calibrating an instrumental response with a known reference, and then calculating the concentration of an unknown sample from the measured instrument response. One advantage of NMR compared to other analytical methods is that the signal response is linear, resulting the NMR signal intensity being proportional to the number of nuclei.

Sample concentrations and purities can be easily measured from known peaks once the proportionality constant is calibrated using a reference of known concentration and purity. Such measurement methods are known as quantitative NMR, or qNMR for short.

The qNMR method has been around for over 20 years. Due to the high demands in accuracy and precision (about 1%), this method has so far been limited to high field instruments. This post shows the extraordinary performance in resolution and stability enables the Spinsolve benchtop NMR spectrometer to be used to verify the purity of a commercial drug sample.

The internal standard sample needs to be of known (preferably high) purity and highly soluble in the chosen solvent, but not react with it. In order to be able to accurately weigh it, the standard also should be non-volatile and non-hygroscopic. It should only have few signals, which are well separated from the analyte signals for minimum peak overlap. Suppliers for NMR chemicals nowadays can provide certified qNMR reference samples for different solvent/analyte combinations.

As an example for qNMR we checked the purity of a commercial lidocaine sample (>98% according to the manufacturer’s label). The measurement was performed on a 43 MHz Proton Spinsolve benchtop NMR spectrometer. Maleic acid was chosen as an internal reference sample, as it has a single peak at 6.4 ppm, which is well separated from the analyte peaks. The aromatic (Aro) and methyl (Me) peaks of lidocaine were chosen for quantification. The aromatic peak is an unresolved multiplet containing a total of three protons positioned at about 7 ppm. The methyl peak is a triplet representing six protons and located at 1 ppm. The spectrum of the sample, along with the assigned peak integrals for the purity calculation, is shown below. 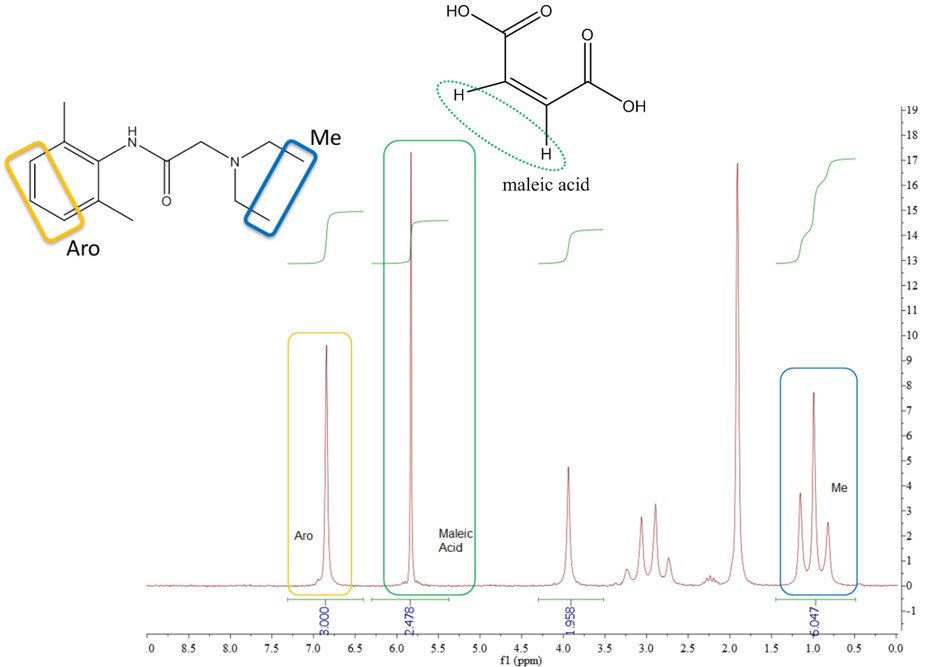 Proton spectrum of lidocaine with maleic acid as internal reference

Six independent samples were created by co-dissolving lidocaine and maleic acid in DMSO-d6 at a concentration of approximately 50 mg/mL. A mean purity of 99.0 ±0.7 % was measured from the six samples, confirming the manufacturer’s purity specification of >98%. 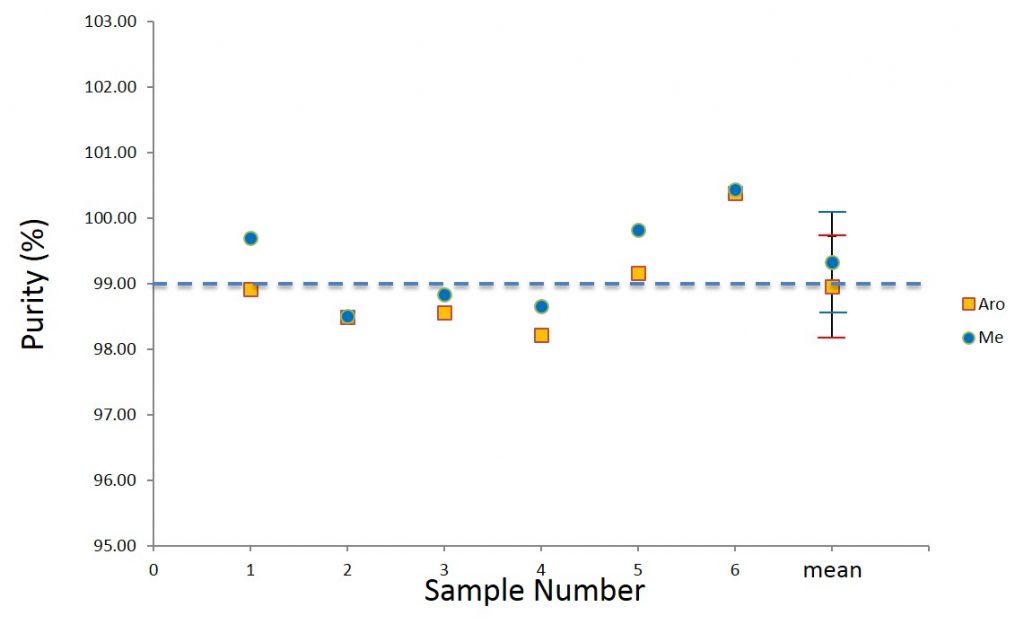 Measured purity of lidocaine from aromatic and methyl peak.

Want to learn more about benchtop qNMR? Let us know!

Bertram works as Senior Applications Engineer for Magritek in Wellington. He gained his PhD under the supervision of Paul Callaghan and has been working in the field of NMR technology for over 20 years. 133 Posts