Stream the Webinar: Uncover the Potential of Benchtop NMR in Forensics Labs

Click the red button below to stream a replay of our webinar held on 12th July 2016: Uncover the potential of Benchtop NMR in Forensics Labs 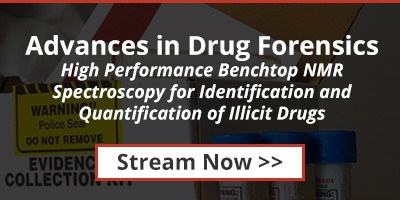 In this webinar you will learn about:

Advances in benchtop NMR spectroscopy overcome many of the limitations of high field by providing a simple to use, portable NMR spectrometer that fits on the laboratory bench. This webinar demonstrates examples where benchtop NMR can be used to distinguish between related compounds, such as isomers, and where other techniques lack the discriminating power or simple sample preparation. We also demonstrate the quantitative capabilities of benchtop NMR with forensics examples.