We have developed a new undergraduate laboratory experiment using the Spinsolve Carbon NMR spectrometer that aims to introduce NMR using simple 13C-NMR and DEPT experiments to identify and assign the resonances of an unknown alcohol. 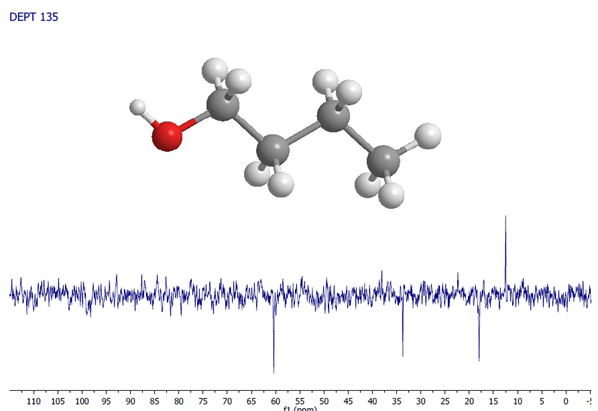 This experiment, ‘Introduction to 13C-NMR and DEPT – Identification of an Alcohol’, utilises the identification of alcohols by NMR spectroscopy which is aimed to introduce students to NMR spectroscopy early in their undergraduate career.1H-decoupled 13C-NMR spectra are much simpler to interpret than 1H-NMR spectra, and therefore is a good way to introduce students to NMR spectroscopy for the first time. The use of alcohols allows students to correlate electronegativity with chemical shift and the peaks in the 13C‑NMR spectrum are well separated for straight forward interpretation. Alcohols are also a simple example for students to employ the nomenclature for naming organic compounds. There is also the option of introducing distillation into this laboratory as an experimental technique to purify and determine the boiling point of organic liquids. Because all of the alcohol samples are liquids, samples for NMR analysis can be easily prepared so that students can acquire their own spectra of neat liquids.