NMR is a common tool used in biochemistry for structural analysis of macromolecules. Here we use the glucose as a simple small molecule system to show that you can observe different conformations within biomolecules using the Spinsolve benchtop NMR spectrometer. In solution, D-glucose is predominantly in the form of a pyranose ring, but that ring has two possible anomeric conformations. The anomeric proton is in the equatorial position for the alpha-anomer and in the axial position  for the beta-anomer. 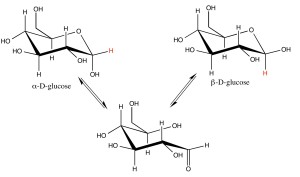 These two anomers are easily observed by their distinct NMR spectral lines at 4.6 and 5.2 ppm.

In addition to chemical shift they have very different J-coupling constants due to the rotational angle between the coupled protons. The axial anomer has a much larger coupling than the equatorial anomer as described by the Karplus equation. Karplus won a Nobel prize for in 2013 for this relation because it has been so important for structure determination of biomolecules. 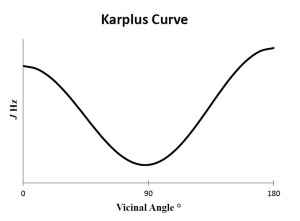 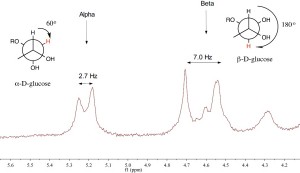